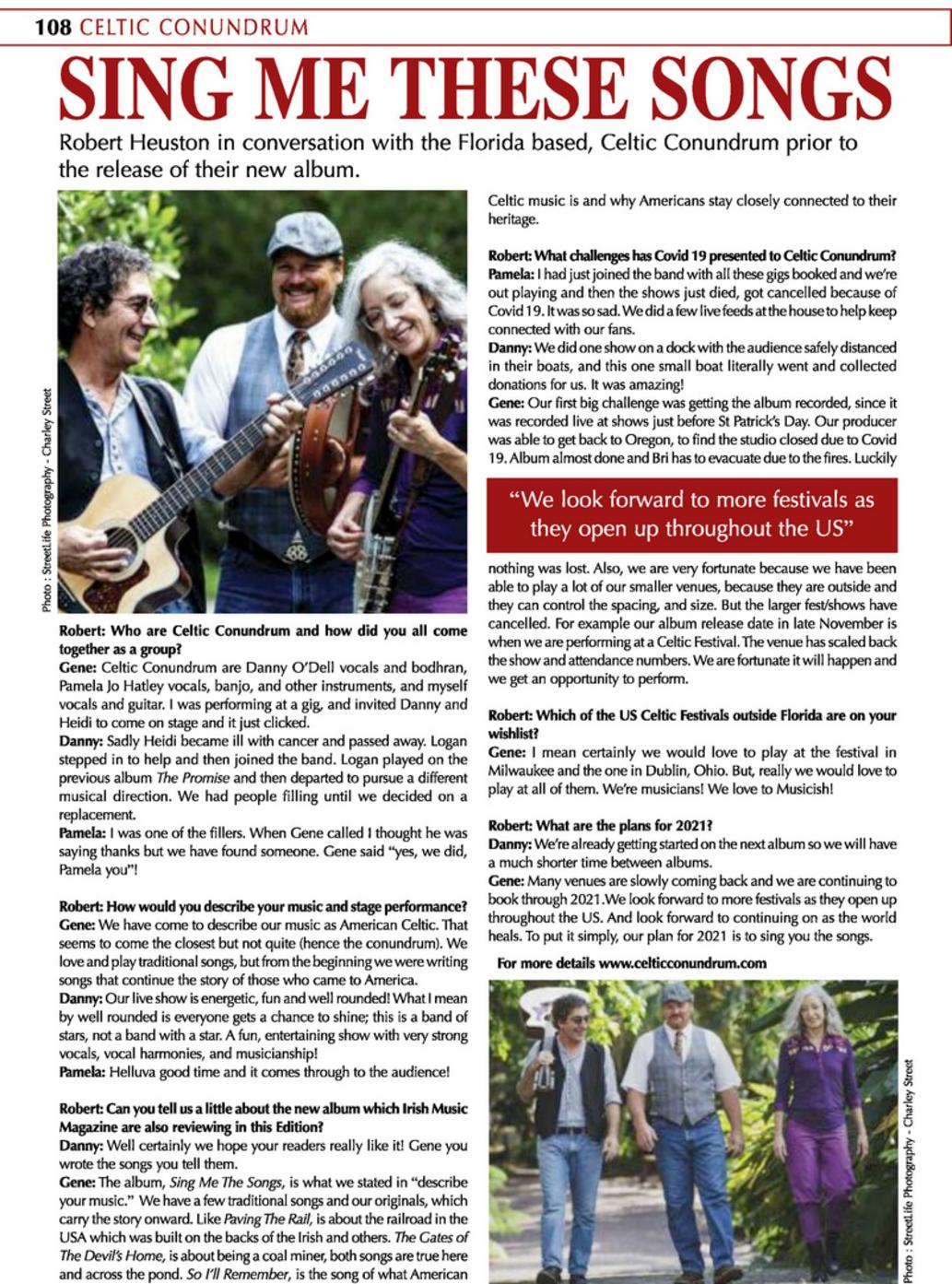 ​Our review in Irish Music Magazine:CELTIC CONUNDRUM
The Promise
Own Label, 15 Tracks, 56 Minutes
www.CelticConundrum.com
Celtic Conundrum write their own material that is inspired and informed by the Celtic Diaspora’s shared heritage. Florida based Celtic Conundrum describe their music as what you might have heard from a culturally diverse ship’s crew, the kind of thing Matelots would bring to a quayside tavern.
Theirs is a very modern take on that Diaspora paradigm, with music that is immediate, and visceral, it hits you with percussive guitars and an almost ever-present bodhrán, played old style, on the beat and high toned. Lead vocalist Danny O’Dell has a Dylanesque voice, ideally suited to the polemical twist and turns in such songs as Werever You May Roam (their spelling) and Dublin Town (with its flute solo echoing the wildness of early Jethro Tull). They sing Bobby Sands’ The Voyage, which we know here as Back Home in Derry, injecting it with spite and venom befitting the tale it holds. The strident final track Through The Storm nudges them into the zone of acoustic Celtic-punk, it’s a track delivered with edgy attitude.
Logan Mills plays an impressive range of kit: fiddle cello, flute, drums, accordion and various brands of ethnic percussion. The third member of the trio is called Gene Martinelli, he also sings lead and adds backing vocals, 12 string guitar, electric guitar, banjo and djembe.
There is a Knopfler style electric guitar lick on The Promise Now, and a pair of tracks named after a 19th century shipping line that sailed between New York and Liverpool, called The Three Sisters, the first iteration is served a cappella followed by an almost Arabic The Three Sisters No.2.
Celtic Conundrum’s website list more than a dozen Florida bars in the Celtic circuit.
Clearly this group have a strong following and based on the strength of this album will be a popular addition for Festival goers in the United States.
Seán Laffey

"CELTIC CONUNDRUM
Sing Me The Songs
Own Label, 11 Tracks, 41 Minutes www.celticconundrum.com
Florida based trio Celtic Conundrum. Celtic fusion is popular in the
sunshine state as they play at Celtic Festivals, Highland Games and Pirate
Gatherings, Steampunk Festivals, and pubs across Florida. Their sound
has been honed in front of live audiences and this direct connection
continues in this new album. They are a ballad band with a penchant for
high energy songs, drawing on influences from rock, folk and Americana.
The opening track Two Shots of Whiskey & A Prayer is like an acoustic
Lynyrd Skynyrd back yard jam, great tremolo mandolin playing here lifting
the track to another level. Some tracks on this album will be known to
many of our readers, Ye Jacobites by Name (the shorter Robert Burns
version), Step It Out Mary and Wild Mountain Thyme, the closing anthem
for hundreds if not thousands of folk clubs around the world. They dip into
the rich ballad repository of Newfoundland on the hilarious The Night
Paddy Murphy Died, a dark tale of drinking at an Irish wake. Gene
Martinelli is the songwriter in Celtic Conundrum. He addresses the folk
themes of hard labour on Paving The Rail, a story about the separation felt
when every mile of railroad track laid down was another mile away from
your sweetheart. And of the cramp confines of coal mining on Gates of
the Devil’s Home.
Americana meets Irish whistle on Call to the Wind. There’s more low
whistle on Birch Hill, the most lyrical track on the album, the whistle
providing a bridge between verses. They bring a close harmony aesthetic
to the title track; this features the voice of their five string banjo player
Pamela Jo, the chorus, a request: “Grandma sing me the songs, so I’ll
remember and carry them on.” Celtic Conundrum are singing our songs
and creating new ones. Sing Me the Songs is a credo of their craft.
Seán Laffey"